Dogs do what works for them.

“My dog knows what I’m asking him to do, but won’t do it. He’s a stubborn dog!” Well, why should he do it? Dogs do what works for them.

If they have a history of reinforcement for a behavior, they will do it because it has consistently paid off in the past. For instance, you have taught your puppy to sit. At first, he got a treat each time he sat. Then, when he seemed to know it well, he got a treat sometimes and just a “good boy” and maybe a pat sometimes. But good things happened because he sat. And Mom or Dad smiled and were in a good mood when he sat. So he willingly sits when asked–it has worked well for him.

But what if once you think he knows sit, you stop giving him feedback. You ask him to sit, and then turn away without acknowledging that he sat. Or if he is doing something you don’t like, you snap “sit”, and again don’t let him know that he was good for sitting. Pretty soon, he isn’t going to sit on cue anymore–it isn’t getting him things he likes. “Boy, is my dog stubborn!” No, he just doesn’t have a reason to do as you asked! 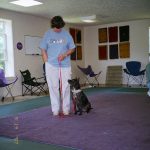 People often say their dog will do anything to please them. I think that really pleasing their person works for that dog because the owner is happy, smiles, is in a good mood. That definitely works for the dog! So yes, the dog is trying to please. But I think it is because he has learned that pleasing the person works for him. But does it really matter? The two have a good relationship and are happy with each other

You want a connection with your dog. 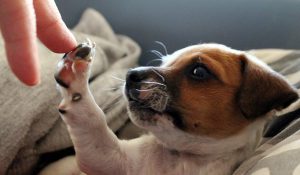 You have to matter to him. That may sound strange, but if you aren’t a big part of his life, you aren’t going to have a dog that wants to work with you. Simple things, such as hand feeding him his meals for a while, instead of just putting his bowl down, with help forge a connection. Does he like toys? Games of tug or fetch are great to build a connection. Having him do simple tasks to earn treats will make you more valuable in his eyes. He’s sniffing around in the grass? Get down next to him and check out the grass–you will suddenly become interesting to him.

When you take him for walks, you might take a toy or treats and periodically have a play session, or some good treats for him checking in with you. He’ll probably be very interested in all the great smells to check out–that’s fine. It’s great mental stimulation and is him being a dog. But from time to time on the walk, have short sessions where you are his focus. Find what he likes and add it to your walk. A game of tug or yummy treats when he responds to his name. Or a quick game of tag, with him chasing you (assuming he’s not a nippy puppy!). So that you are still important to him, even though he has other great things to investigate. 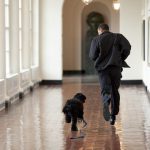 Very often we think the dog knows what we are asking, but he really doesn’t. For instance, you have taught your dog to lie down, by luring him down with a treat. To do that, you probably got down on the floor with him, or bent way over. He’s doing it really well. Then you stand up fairly straight, ask for the down, and he looks at your blankly. Stubborn dog? No, he has no idea what you are asking! To him, the body language of you leaning down was a big part of the signal. All of a sudden, the signal is totally different, and he has no idea what you are asking. “But I said the cue and made a hand motion.” But to him, your bending low was the signal, or at least part of it!

Also, keep in mind that if you give a verbal cue and hand signal together, the dog is probably going to only focus on one. Dogs are masters of body language cues, so that usually is what the dogs pick up on. Then when you use the verbal cue by itself, the dog looks at you blankly. Again, stubborn dog? No, you aren’t speaking a language he understands.

So you taught your dog to sit on cue in the house. Then you went to the park and asked for a sit. Your dog didn’t do it. But think of all the distractions around him! You may have to bring out a treat and lure him into a sit a time or two, before he can do it with all the distractions. He isn’t being stubborn, he just can’t focus on what you want with all the sights, sounds and smells around him. This is normal, but with practice he will get so he can do as you ask, even in high distraction areas.

My favorite example of the dog not responding to a cue because of distraction, is when the owner himself is the distraction! Often in class an owner will ask the dog for something the dog knows. If there isn’t an instant response, the owner repeats the cue over and over. “Sit, sit, sit, sit”. I’ll tell him just to be quiet a moment, and the dog almost always responds to the quiet by sitting! It seems as if the barrage of the repeated cues actually distracts the dog from obeying it. Or maybe the string of repeated cues hides the meaning from the dog–he can’t tell that there is a cue in all those words. I don’t know, but often these are the situations when the owner declares the dog stubborn, and he caused the problem himself!

Dogs do what works for them. Some dogs are easy to motivate–they love treats, or toys, or praise and interaction. Other dogs are harder–we have to find what they want to work for.

If your dog loves food, you are very lucky. Most dogs do, but some are quite picky. Tasty treats are definitely the easiest way to motivate the dog when doing basic obedience training or tricks training. But even a food motivated dog has preferences. And great rewards produce great results. 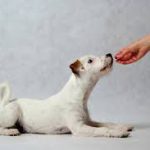 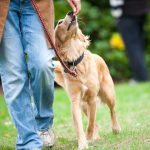 In class there will sometimes be a dog who is working, but isn’t very focused on it. For instance, a dog heeling, taking his treats when they are offered, but sniffing around and checking out the other dogs. I’ll tell the owner he needs better treats. “No, he’s eating these.” So I’ll give the owner some bits of roast beef to use. The dog is instantly totally focused!

Toys can be great motivators, especially for things the dog already knows. But even there, experiment to find the toy your dog really wants. At a Search and Rescue seminar, there was a dog who wasn’t doing very well, and whose owner was considering washing him out of the program. His reward was a ball, but he wasn’t that excited about it. Another handler offered a rubber squeaky chicken. The dog was nuts about it, and would do almost anything for “chickie”. He went on to certify as a Search and Rescue dog, and went through many “chickies” in his training.

It’s not just rewards that motivate your dog. Dogs are very sensitive to our moods and feelings. Smiles, happy talk, praise and enthusiasm will have your dog much happier working with you. Would you be more likely to hang out with someone always sounding annoyed at you, giving commands in a sharp voice, and frowning, or someone upbeat who seemed to genuinely like you? Your dog is no different in that respect! 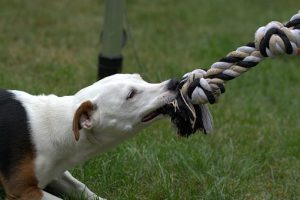 When you are thinking that you have a stubborn dog, ask yourself these questions:

* Does he actually understand what I’m asking?

*Is he too distracted at this moment?

*Do I have a connection with my dog–am I interesting?

*Do I have a great history of reinforcement with this cue, or a treat or toy he genuinely wants?

I truly believe that those dogs called stubborn either don’t understand or lack the motivation. And we, the human part of the partnership, are the ones responsible for providing clarity to our requests, and finding what each dog will WANT to work for. Happy training!

7 thoughts on “Stubborn Dogs? No Way!”