Motivation is key when training your dog, and great rewards build great motivation. What should I use as a reward? There is a saying that the dog chooses the reward, and I believe this to be true. You may think that tugging is a great reward, but if your dog isn’t toy motivated, it isn’t a reward at all! The treat package says dogs love them, but your dog may not find them appealing. Your bouncing around cheering will make some dogs work hard to get you to do it some more, other dogs just wonder what’s up with that?

To teach a dog a new behavior, or change a behavior he already has, the dog needs a reason to do it. That you ask him to do something is not a reason to do it, unless he knows something good is going to happen, or there is a history of good things happening when he does what you asked. 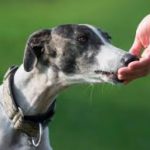 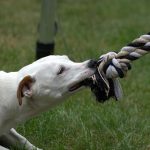 Getting a reward, something he likes, makes it more likely the dog will repeat the behavior. A food treat, a play session, upbeat praise, something that is meaningful to the dog will let him know that it is worthwhile to repeat the behavior. You ask your dog to sit at the door, then open it for him to go out–that is a reward which will make it worthwhile to the dog to be polite at the door.

The Dog Chooses The Reward

I see people every day using rewards that aren’t meaningful to the dog, and wondering why they aren’t getting the results they want. This is when I hear comments such as “He’s stubborn” or “He’s not very smart”. No! He’s not motivated! (Stubborn Dogs? No Way!)

If the dog eats a food reward, or treat, it doesn’t necessarily mean that the treat is high enough value to use for training. I see dogs in class that are taking the treats offered, but not really focusing on the handler. Perhaps we’re working on beginning heeling, and the handler is giving the treats every few steps when the dog is at his side. But the dog wants to sniff the floor, pull towards the other dogs, basically not focus on the handler.

When I say they need better treats, I usually hear “No, he’s eating these”. So I give them a meatball to use, and the dog’s attention is 100% riveted on the handler! The dog just chose his reward!

Treat Or Toy Or Praise?

Try different rewards and see what works for your dog. If a dog likes toys, I will be tugging, then throw a ball. Does he drop the tug and run after the ball? Then be throwing the ball, and whip out the tug toy. Does he immediately grab the tug, or does he look for another ball throw? Experiment like this, and you will find what your dog prefers

Offer him a treat while he’s playing. Does he ignore the food and keep wanting to tug? Or does he immediately drop the tug to take the food? Whichever he chooses, he’s telling you his preferences.

If you are praising him and throw a treat or toy, does he stick with you for more attention or go to grab his treat/toy? Again, he’s telling you what is most important to him.

Food treats are definitely the easiest in training class, and for many training situations. The dog gets his reward and is ready for what’s next.

But all food rewards are definitely not created equal! I have had dogs who will work their pants off for their kibble! I have also had dogs who turn their noses up at hot dogs, most store bought treats, etc. I have one dog who is eager for mozzarella or provolone, but refuses cheddar or Swiss. I worked with one dog who valued watermelon over all other treats.

A great training exercise is the Name Game. It is also a good exercise to judge the value of your reward. Say your dog’s name in a clear but neutral tone of voice. Say it just once, and when your dog looks toward you, mark the behavior with a click or “yes” and reward. (See Clicker Training Dogs–Great Communication)

If the dog doesn’t respond to his name, don’t repeat it! We don’t want him to think his name is “Rover, Rover,Rover”. We also don’t want him to get in the habit of ignoring his name until it suits him to respond to it.   Make a different noise, and when he looks at you, mark and reward. Wait until he looks away, say his name again, just once. If your reward is good enough, the dog will soon be looking at you as soon as you say his name.  The goal is to be able to get your dog’s attention, get him to look at you, by just saying his name.  At first in easy situations at home, then in easy situations away from home, and ultimately no matter what the distraction!

If your reward is valuable to your dog, he will be a star at this behavior! If you are using what he really values–treat, toy, super praise–he will probably keep his attention on you, looking for more rewards. Awesome. If he doesn’t learn the game really quickly, after only a couple repetitions, there are too many distractions for him at his level, or he has just told you his reward is not very valuable.

You Are Part Of The Reward

Your attitude and behavior are part of the reward! Bark out commands like a drill sergeant and hand your dog a reward without any evident interest or joy, and you will never have the dog you could.

Training is an adventure you and your dog are on together. Show some joy, act as if you are having fun (I hope you are!), interact with your dog, and you will have much better results.

Dogs are very sensitive to our moods and expressions. Smile at your dog, and he will probably react with a wag or a smile of his own. Start enjoying training rather than thinking of it as a chore, and your dog will do likewise.

You need to discover what your dog chooses as his reward. But you may use different rewards at different times or situations.

For instance, if I’m teaching a new behavior I will use a top value reward. I want the dog to LOVE doing the new behavior!

If I’m asking for something the dog knows very well, and isn’t in an environment with a lot of distractions, I may use less valuable, but still good rewards. For instance, when I’m working at home, reviewing known behaviors.

When you are at training class, there is usually a lot going on. You want really high value rewards, so you are more important to the dog than the distractions.

Even with good rewards, there are times the dog will be out of his comfort zone, and will refuse his favorite treat or toy. If you can, make the situation less stressful–use calm talk or move to a quieter area–and he should start taking the rewards. This is normal behavior, and you can use it as a barometer of your dog’s comfort level at that time.

I work a lot with Search and Rescue dogs. I recently started working with a young German Shepherd and her handler. I’ll call the dog Tess. Tess was working for a tug reward that she seemed to really like, and played with well.

“Run aways” are the first exercises we do. A “subject” teases a dog with her reward for a few seconds so that the dog knows the subject has the toy or food (in this case, the tug rope). Then the subject runs a short distance and hides, and the handler sends the dog to search. When the dog reaches the subject, she’ll get her reward–in this case a great game of tug.

We switched to meatballs, my go-to high value treats. What a difference! She is totally focused on finding the subject, ignoring all distractions. And she stays at the subject gobbling small bits of meatball until we choose to stop. She is now ready to move along in her training, and looks as if she may be a good, solid SAR dog. And if you were lost, wouldn’t you want the dog looking for you to be totally focused on finding you? 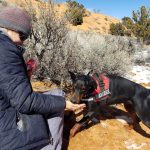 By very gradually making the problems more difficult and longer, but having the best reward possible at the end, SAR dogs will search for hours seeking that reward. The reward has always been so good, that the process of getting to it becomes rewarding in itself.

Searching (hunting) is something that is pretty instinctive to the dog. But any behavior that is rewarded heavily until the dog is proficient at it will have a history of good reinforcement. A behavior with a solid history of reinforcement becomes rewarding in itself. Huh?

You teach a dog a trick. You reward him at first every time he does the trick on cue. Soon you will be able to fade out the rewards, because the trick has a great history of reinforcement, so it brings good feelings with it. Rolling over has always gotten a treat, praise and happy laughter from the humans. So the dog will roll over willingly on cue, and get up wagging and prancing, even though he didn’t get a treat! Doing the trick brought back memories of all the great things that go along with it. 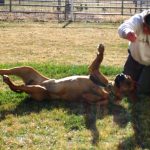 Of course, the dog will still need some reinforcement, or the trick will become less valuable. If you ask him to roll over, then just walk away, how long do you think he will still want to do it?

If he knows it well, and always gets some feedback “Good job, Rover!” he will keep doing it. Throw in an occasional treat, and you have it made!

Find rewards your dog really, truly loves. Reward generously while a dog is learning a behavior, and your dog will be eager to work! Use a variety of rewards, and don’t forget praise, smiling and happy talk. At first, you add them to the food or toy reward, and as the dog gets solid with a behavior–knows it well and does it eagerly when cued–you can use the praise as the main reward, intermittently adding the treat or toy reward.

What Works For You?

What rewards work for you and your dog? I’d love to hear some experiences you may have had with training rewards.

Feel free to leave questions or comments. If you would like to contact me directly, email me at keith@goodtimesdogtraining.com Happy training!